I’m all for natural lighting, to the extent that I would live in a glass house if I could. I’m the jump out of bed (well okay, not jump but curse the alarm and get out of bed) kind of person, who before anything else draws the curtains and says hello to sunshine/rain or whatever else is waiting.

And then there is the husband who would rather close every inch of space from where light could penetrate (“It becomes too hot if you open the curtains”). I told him to go live on the North Pole (actually I said ‘London’ because he’s more likely to make a living there). And while I call him names I also realise he’s not alone in his thinking. Thankfully my room-mate in college agreed with me but we would always be surprised how other people could switch on lights at 10am instead of sunbathing indoors.

What’s more, you save on electricity bills too. Of course that’s not what I’m thinking when I do what I do but it sure is an argument I’m going to use against curtain-closers. When you’re living in the city, curtain closing should only be for privacy, not because you’re a sunlight-hater. Sure there are times when you’re sunbaked enough outside to want any of that indoors. That is when you want to live in the air-conditioned, dim lighting cocoon. But no other time is an excuse mister. 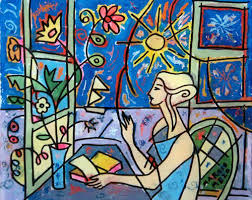 And artificial light-wise, give me yellow over white any day. There’s something almost obtrusive about white light, which is why it is probably great to study under. But for all else, paint my room yellow please.

Rest assured my war against curtain closing isn’t over. I refuse to switch on house lights before sundown. And more importantly, my weekend afternoon tryst with 19th century classics is not going to involve a tube light.