This is what happened one day many summers ago…

Your afternoon siesta is disturbed by a phone call.

Its a courier guy asking where you would like to receive a package in your name. You ask him to drop it in at the office on the first working day (which is two days away). He insists on dropping it at your current location (your apartment). When you relate the address he sounds clueless about the area. You really want to help the guy (and it wouldn’t hurt to receive the package soon enough), but you admit not being the best with directions to a place you’ve been in for all of two months. You give the best leads you have and then both of you laugh over your mutual lack of knowledge.

You disconnect the call after he assures you he’ll manage a way out. He tells you to be by the side of that telephone. Who knows how lost he can get. Sure enough, he calls again and confirms your location. Now you’ve spoken with this guy long enough to start talking with his accent (which you can’t quite place on a world map).

Few minutes later the door bell rings. You open the door and its the man behind the last few calls on your phone. The fact that he looks like the sweetest thing on two feet really completes the picture of the pleasant stranger. Both of you can’t help blurting out “Finally” and giving your best smile . You almost apologise for having made the man run around (actually doing his job). He says it was interesting because now at least he knows the place and he wanted to complete his deliveries before the weekend. Then you sign off (literally sign for the package delivery) and you wish each other a good day.

That neat little interaction right there was pleasanter than several others with supposed non-strangers, which is why I still remember it after nearly six years.

That the smile of the day should come from such unlikely quarters is what made it all the more special.

Perhaps that smile was just a courier guy doing his job.

Or (and I have reasons to believe this one) it was a genuine man about town who made receiving a courier a pleasanter activity than signing for packages can possibly be.

This could happen to you too. So always be armed. With a SMILE. 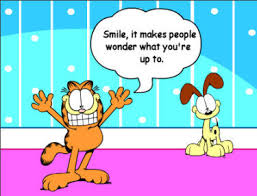